Whilst the information you are submitting on the enquiry form will only be used to contact you, we would strongly recommend that you view our Data Protection Statement before you proceed.

As a private dentist, he had just agreed to sell his practice and wanted to plan for his and his partner Sue’s (aged 51) long-term future.

To help fund this, their assets comprised of:

Their immediate concern was to ensure the £750,000 would be invested appropriately, taking into account their appetite for risk as well having the ability to draw an income from this, if required.

The first step was to create a long-term financial plan, which would include measuring their income and assets against their projected outgoings of c£5,000 pm. This would be until Michael’s 100th birthday, with inflation of 3% pa and, initially, assuming the £750,000 remains on deposit at 2% pa.

The table below shows:

For example, the yellow line indicates that there is a significant shortfall of income required. As capital needs to be drawn upon to supplement income, it’s projected that the capital will be exhausted at age 82 / 68. 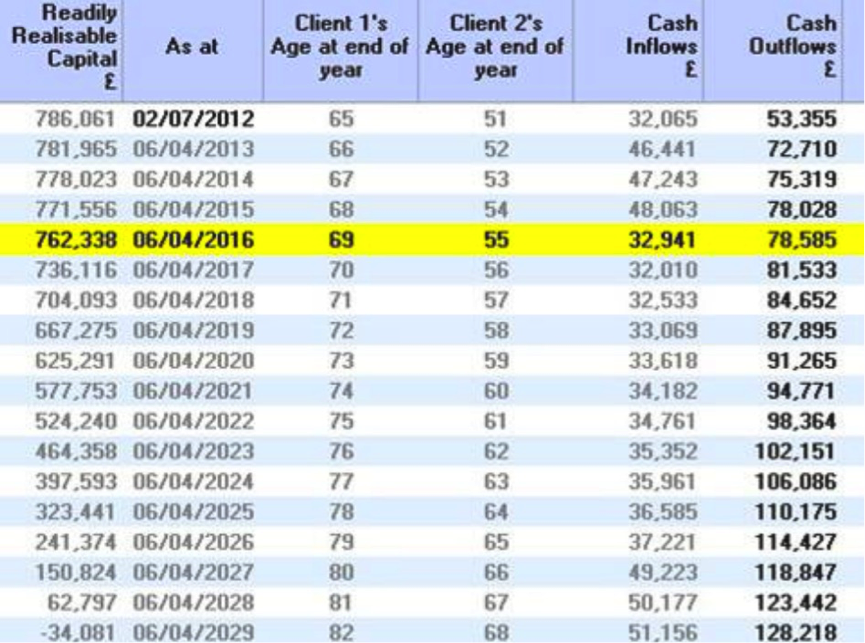 This can be seen below, where the blue is the capital balance reducing – the value on the left axis is in today’s pounds, with age along the bottom axis. The red is a negative capital balance (which indicates Michael and Sue will run out of capital):

At this stage they were faced with a few options:

We then looked at how the situation would be impacted if the £750,000 was invested and attained an annual return of 5% pa:

As you can see, the capital now runs until age 90:

Lastly, we factored in Michael and Sue:

The positive impact of these is clear to see, with the capital now running until age 100.

What it meant for Michael and Sue

They were now able to plan with more confidence than they had in the past, with the focus being on updating their financial plan first and foremost every year before analysing the performance of the invested capital.

Seven years since we met, the plan is very much still on track. Another positive is that the £750,000, which was invested in 2012, is still worth more than this, even taking into account the fact that £164,000 has been withdrawn to date (they are invested in a low risk, well diversified portfolio).

We’ll continue to work alongside Michael and Sue, updating their plan annually, which will take into account their ongoing aims and aspirations, as well as external factors such as inflation and projected investment returns.

Enquire about your own personal situation, please complete the enquiry form.

Please note that these case studies are provided as an example of the work we do. Each case study is specific to that particular client and we recommend that you always seek financial advice before making any investment decisions, taking account of your own specific circumstances.