Whilst the information you are submitting on the enquiry form will only be used to contact you, we would strongly recommend that you view our Data Protection Statement before you proceed.

Diane and Mark were senior house officers in a London hospital when we first met them back in the mid 80s.

At the time it was all about them having a great time before they married! We simply arranged some income protection policies, just in case, and then as the years went by things got more complicated.

They married and had 3 children into the early 1990s, and living in London meant they had a large mortgage. It was all about surviving for a while and we helped with the mortgage, adding life protection to cover the loan and the family. In addition, their income protection and locum cover were updated to reflect their higher earnings.

Wills and Enduring Powers of Attorney were also fully updated.

As Diane & Mark became more senior, debt repayment became their priority and they managed to reduce their debts considerably. They also told us that their fathers’ had set up various small savings plans for them over the years, which they had ignored as they did not pay for them.

The years go by

By 2015, with them now both turning 50, a major update was required as many of their circumstances had changed. We asked Diane & Mark to really think about their priorities and concerns, which were:

Now fully understanding their needs and concerns, we compiled a Financial Map for Diane & Mark which measured their goals against their current and future financial position and assets.

Their assets comprised of:

Having updated their Financial Map, we looked at their position before downsizing.

This was fairly healthy, illustrated by their capital in blue in the chart below. However, by their mid 70s funds were getting low.

The value on the left is in today’s pounds, with age along the bottom axis (which runs to age 90).

Diane & Mark were reassured by these results, but a big concern was their mid 70s situation with funds getting low.

Also, the more they thought about it, this would be a good time to perhaps gift more money to their children if it made sense, and taking into account the Inheritance Tax rules at the time.

This improved matters considerably, and gave Diane & Mark extra funds to maintain their lifestyle, and the cash available to further gift to the children if they so chose.

The table below shows: 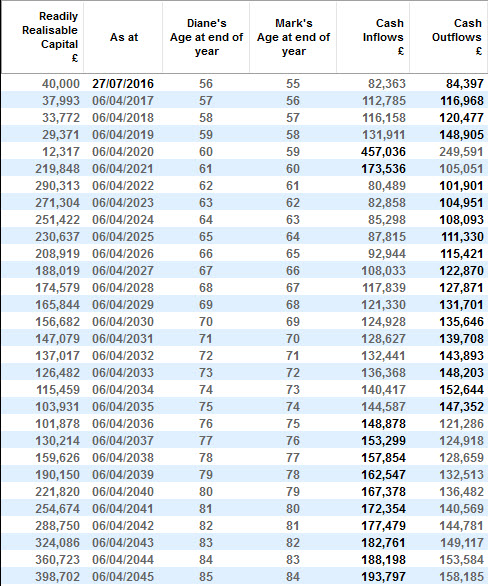 What it meant for Diane & Mark

This new strategy, concentrating on what Diane & Mark really wanted, meant that they felt far happier and psychologically, being debt free was a real bonus. It also meant that they were taking less risk to achieve their life goals, as debt was eliminated.

A big plus for them was knowing that going part time did not harm their NHS Pensions very much at all.

As the planning was very thorough, the cancelling of most protection products resulted in a £312 pm saving.

They were now able to plan their new less stressful lives with confidence, with the focus being on updating their financial plan first and foremost every year and analysing the performance of the invested capital.

They also really appreciate how much of a positive impact genuine financial planning has made to their lives and will continue to do so in retirement.

This peace of mind is invaluable to them.

We will continue to work alongside Diane & Mark, updating their plan annually, which will take into account their ongoing aims and aspirations, as well as external factors such as inflation, projected investment returns and Inheritance Tax rule changes.

Enquire about your own personal situation, please complete the enquiry form.

Please note that these case studies are provided as an example of the work we do. Each case study is specific to that particular client and we recommend that you always seek financial advice before making any investment decisions, taking account of your own specific circumstances.